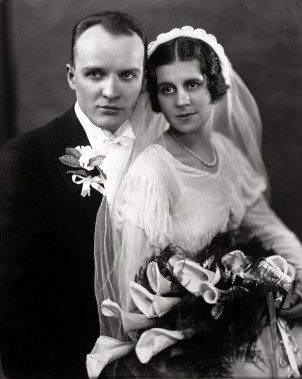 On September 29, 1934, about 6 weeks before the wedding, Lottie’s mother, Maryanna (Suska) Wagner passed away. She died of pulmonary tuberculosis, at the age of 44.

At first, Lottie and Charlie talked about postponing the wedding.  The family would not hear of it and they were told to keep their plans as they were.

Lottie and Charlie raised two children and were married 58 years. Only death could separate them – Charlie died on February 19, 1993.  Lottie didn’t die until years later – February 17, 2010.

“Two souls with but a single thought,
Two hearts that beat as one”

I invite you to join me as I share my journey of successes, surprises, and of course, disappointments. All belong to my passion called Genealogy.
View all posts by Our Lineage →
This entry was posted in Blogging, Family History, Genealogy and tagged ancestors, family history, finding out about my family, Genealogy, Illinois, Researching your family tree, Suski Surname, Wagner Surname, Wedding Wednesday, Zaber Surname. Bookmark the permalink.