I found a wonderful recollection of Fr. Edward.  I am including it in an additional post this week – I hadn’t intended it, but it gives such insight into who he was, that I cannot pass the opportunity up! 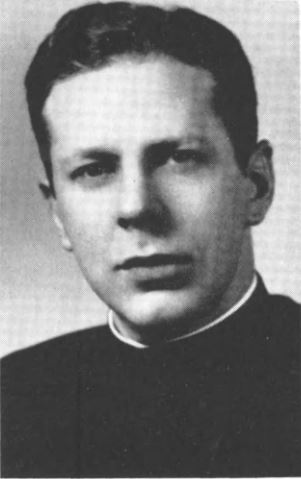 Rev. Maurice Edward Anderson, O.Carm., was born April 27, 1910, in Chicago, Ill. He died one week before his 48th birthday, April 20, 1958, of a cerebral hemorrhage in St. Bernard Hospital, Chicago, with his mother at his bedside. One can’t help but feel it was a reward from God for the constant concern Fr. Maurice had for his mother.

He was born and baptized in St. Laurence parish.  A Father Maloney baptized him with the name of Edward.  His mother was Marguerite Bower, his father was Thomas J. Anderson.  He was one of five children. Neil and Thomas are the only survivors at this 1968 writing.  Loretta died at the age of 15 of spinal meningitis, Charles as an infant.  His father died during Fr. Maurice’s grade school days; his mother in February of 1960, two years after Fr. Maurice.

Fr. Maurice attended St. Laurence and Holy Cross grammar schools.  During his high school days and after graduation he worked at the Little Flower Society for Father Albert Dolan. Because of his close association with the priests in high school and his deep interest while working at the Little Flower Society, it was no great surprise when he expressed his desire to go to Niagara.  At Niagara he continued his studies, made his novitiate, completed his philosophy and gained sufficient credits for a degree in education.  On returning to Chicago in 1934 as a theology student, he attended De Paul University night school to gain sufficient residence for his bachelor degree.  He also attended Notre Dame University.  While a cleric at Mt. Carmel he taught English, journalism, commercial law and religion.

On May 16, 1937, Fr. Maurice was ordained to the priesthood by the Most Rev. Bernard J. Sheil, auxiliary bishop of Chicago, in Quigley Seminary Chapel.  After ordination he was named prefect of religion and student advisor at Mt. Carmel.  His deep interest and untiring concern for the individual student at Mt. Carmel earned him a deep trust in the mind of the student body. Long after his term as prefect of religion, he was a constant confessor in the student chapel at noon.  Only God knows how often his office was used as a confessional.  He was a sought after confessor.

In 1942 Fr. Maurice became school treasurer and community procurator.  As school treasurer and collector of tuition, he accomplished his job with firmness but kindness.  He had the knack of knowing the deserving boy.  Years later the writer has been told on numerous occasions of the deep understanding on the part of Fr. Maurice when a family had financial troubles.  As community procurator he inaugurated many ideas and systems which exist to this day.  His idea of a good procurator was the word service.  He had concern for not only the necessities, but always added that little extra which gave a bit of class.  He was a good provider.  The men who assisted him held Fr. Maurice in high regard because he treated his co-workers with respect and was quick to acknowledge their talents.  He took great pride in the maintenance of the school and community buildings.  During his term, the apartment buildings were remodeled into the present faculty house, the chapel was built and the student center erected.

In 1948 Fr. Maurice was named provincial procurator.  The same traits were used on a province—wide basis.  He immediately became well versed on the complete financial picture of the Province.

He had at his fingertips the answers to any and all questions.  He encouraged questions regarding the finances of the Province and in this way not only had the opportunity to make all interested parties aware of the financial conditions, but also gleaned ideas for increasing revenue.  He was a provincial procurator who made a local procurator conscious of the Order’s gratitude.  No effort went unnoticed and unthanked. During his term as provincial procurator the South American Missions were opened.  He assumed the mission procurator duties until a special mission procurator was named.

From 1954 until his death, Fr. Maurice was the moderator of the Carmelite Alumni Association.  It was he who changed the name of the group from St. Cyril-Mt. Carmel to Carmelite.  As moderator he was able to bring the Alumni to great heights.  It was a most tiring job which demanded great interest, determination and endless hours of time. Fr. Maurice gave freely of all these.  Each year he demanded that the undertakings of the Alumni be better than the year before.  He was toughest on himself and no excuse was taken.  He was a great believer in grading upward and going first class.  He never wanted second best for anything Carmelite.  It had to be the best.  During his years with the Alumni he continued friendships with thousands whom he first knew as students.  He had a public relations man’s most treasured gift.  He never forgot a face nor a name; in fact, he could go beyond that and tell you the face’s first cousin and the name’s uncle.  Never did he forget a friend of Carmel nor pass by the opportunity to return a favor. At this writing he would be called a man who “related.”  The immediate circumstance of his cerebral hemorrhage was a hurried trip to the Chancery to get some papers straightened out for a friend in trouble.  It was the day before his death, while in the midst of preparations for the annual Alumni Banquet, he squeezed in a hurried trip to the Chancery.  On the return trip he knew all was not well.  He had taken his mother along for the ride.  When he dropped her off at her apartment, for the first and only time, he did not go up to the second floor with her.  His mother knew he was sick.  Within one hour he was rushed to St. Bernard Hospital. His lifelong friend Dr. Howard McNally arrived immediately with Dr. O’Brien, the heart specialist.  Both doctors agreed the damage was fatal and it would only be a matter of time.  His mother was brought to his bedside and was with him early Sunday morning, April 20, when he died.

Fr. Maurice’s death came a week before his 48th birthday and just a few days before his annual Alumni Banquet.  His death cast a heavy cloud over the festivities, but the greatest speeches of the evening were the little stories told by the Alumni to their friends in private.  They were stories of the great help Fr. Maurice had been to them.  They were stories being told for the first time.  It is no wonder he was named, “Carmel Man of the Year.”  If the Alumni had their way the award would not have been limited to the year 1958.

Solemn Requiem Mass for Fr. Maurice was celebrated in St. Cyril Church.  He had spent his entire priestly career on Dante Avenue and was buried in the Carmelite plot at Mt. Olivet Cemetery.

I invite you to join me as I share my journey of successes, surprises, and of course, disappointments. All belong to my passion called Genealogy.
View all posts by Our Lineage →
This entry was posted in Blogging, Family Lineage, Genealogy and tagged ancestors, Anderson Surname, Carmelite, family history, finding out about my family, Mount Carmel, Priest, Treasure Chest Thursday. Bookmark the permalink.