There have been many posts and articles on the importance of newspapers in your genealogical research.  It really cannot be stressed enough.  Not only can it give you dates, places, etc., but it adds dimension as well.

I had this picture of him: 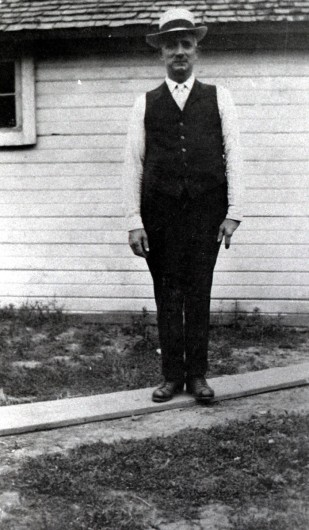 I had asked what had happened to his left hand and family members said that he had had an accident cleaning his gun.  That was all we knew.

“Wm. Morgan, while hunting one day last week, met with a great misfortune.  His gun exploded, tearing his left hand so badly that three fingers and half of the hand to the wrist had to be amputated.  Mr. Morgan, with four friends, were some six miles east of Essex, and as the roads were in bad condition, their horse gave out before they were half way to Essex, and he might have died from loss of blood, but for the kindly aid of some farmer who brought out his own horse and carriage and, it is said, drove four miles in 15 minutes.”

It was written as a hunting accident, not cleaning his gun as was passed down.  I also know that the accident occurred sometime during the week of April 7th, because the article was written on Thursday, Apr 18, 1895.

It never hurts to take a look at the newspapers!

I invite you to join me as I share my journey of successes, surprises, and of course, disappointments. All belong to my passion called Genealogy.
View all posts by Our Lineage →
This entry was posted in Blogging, Family History, Genealogy and tagged ancestors, family history, Morgan Surname, newspapers, Researching your family tree. Bookmark the permalink.

13 Responses to Newspapers – Supplement Your Research