There has been quite a bit of stir on Facebook regarding Thomas MacEntee’s Genealogy Do-Over.

I have had a rough 2014 and am glad to see much of it go.  I haven’t really been blogging or into my genealogical research during the last half of the year.  Now I am ready to get back to the passion that has kept my interest for over 20 years!

This week’s schedule has the following recommended tasks:

I have started a new family tree file – from scratch and will be whittling away at it over the coming weeks.  I have not gotten rid of all my previous research, but it is now only going to be used to extract vital records or other such evidence.  I will not be using it for much else as I do not want to be tempted to “cheat” and take information from there without the necessary due diligence.

When I have gone back and reevaluated a particular family line in the past, I have been pleasantly surprised (and sometimes frustrated) at clues or information that I had overlooked way back when.  Starting over, taking my time, will help me find even more hidden gems!

If you decide to join the Do-Over, please remember to take it slow!  Quick is what results in missed information and hap-hazard tree members.

OH – and don’t think that after 13 weeks you will have your family tree back to 200 A.D. with thousands and thousands of ancestors and source citations!!

Consider this:  Genealogy is very similar to the game of golf.

Happy Ancestor Hunting in 2015 and I look forward to getting back to my weekly blog posts!

Well, if you have been following the last few posts, you know that I lost my mother at the end of June.

I have been researching my family’s ancestry for 20 years now.  My husband told me once that “People die in your family and then you get everyone’s stuff”.  Well, that is certainly true for quite a few Great Aunts and Uncles, as well as a cousin who was more like a grandmother-like figure than a cousin.  I have been blessed with having many items.  A few years back, I began taking pictures and cataloging all the items – who gave it to me, what the significance of the item is, any history of the item, etc.  Most of the ‘stuff’ is being utilized in the house or they are photos that have been scanned and the originals put safely away.

Then my mother passed away and I have come to a whole new level of realization.

My father wanted to get rid of all her clothes, shoes, etc. as soon as possible.  I think that just looking at the items hurt too much.  I, on the other hand, found myself putting all those items in my car for safe keeping.  We finally made an agreement – nothing goes out of the house without the two of us discussing it.

I took quite a few things home.  She was a painter – various media – she even taught classes so there are many items still in the house that she created/painted.  Where am I going to put them all?  Surely we can add an additional room onto the house, can’t we?

No matter how much stuff I take/hoard, it won’t bring her back.  Period.

Wow.  I never really thought about it like that.  I basically wanted to have everything. Touch everything she touched.  Now the shear reality that I have no room or need for most of the stuff really hit home.

Since that time, I’ve given items to my nieces – one bought a house last year and one just bought a house over the summer.  Some of the items are even my grandmother’s.  I didn’t really realize how old they were until I was telling them the story about them.

Well, a few months later, it isn’t any easier.  I struggle with every item that is in the house because she made most of them.  I have decided to catalog all of them and do a few blog posts to document them.  After that, it is what it is.

I also had a few quilts made from some of her favorite shirts.  My favorite is the Disney quilt, which was all her Disney favorites.  She loved Disney, especially Tigger, Eeyore, Pooh, and Grumpy. 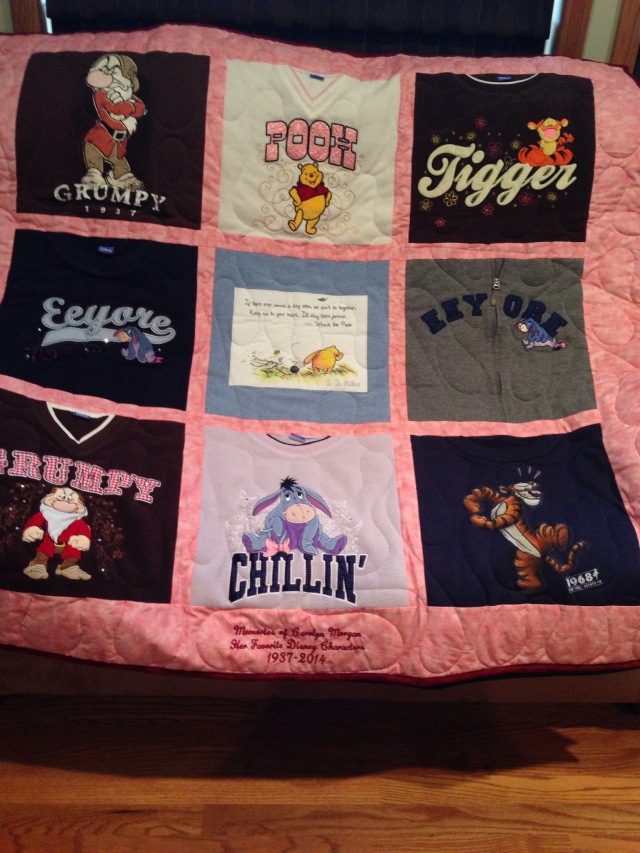 Now when I am feeling bad, I can look at the quilt or even wrap myself up in it to feel closer to her.